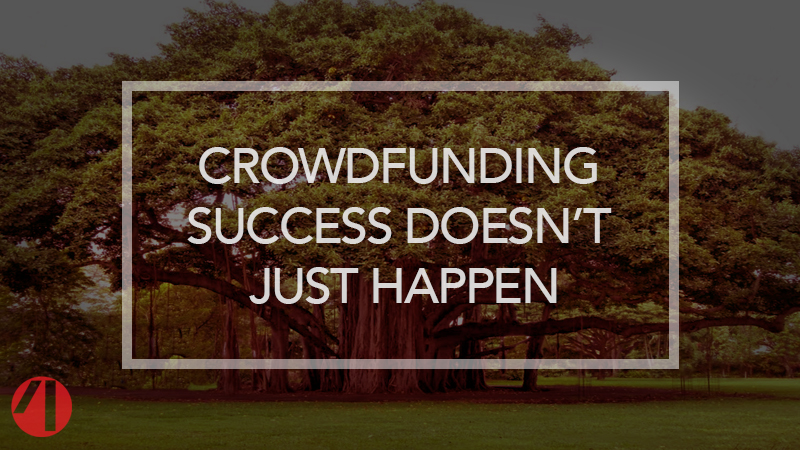 Most people who consider crowdfunding to fund their projects–be those projects books, films, games, or fancy new tech projects–understand that a successful campaign is going to take a lot of work. But then, egos get in the way. You’ve got to have that ego in order to convince yourself to do a campaign in the first place. To do a campaign, by definition you’re putting the future of your creative endeavour in the hands of the crowd. They’re voting for it with their hard-earned money, and determine whether it will succeed or fail. You’ve got to have the ego to assume your project is worth the crowd’s money, and that’s not a bad thing. The problem arises when the ego convinces us that our success is inevitable because our project is just so fantastic. Your success in crowdfunding is not an inevitability. Not by a long shot. It doesn’t matter how amazing your idea is, for the vast majority of us, success at crowdfunding will only come as the result of a lot of hard work.

Some folks may view this as counterintuitive. They see certain campaigns flourish very quickly. Seemingly, the campaign was shared by some major blog, or website, or famous person or two, and the campaigner reached their goal in a scant few days. That’s not the truth, though. That’s not how it really happened. Those campaigns got traction and succeeded not because of some popular site or person sharing them, but because the campaigner did work ahead of time to build their audience before asking that audience for crowdfunding support.

In many cases, these are  people who have built their personal email and contact lists over at least months, though more likely years, and have built relationships with people who want them to succeed. They have built their base by making their work, on some level, valuable to those people in the base.

It’s important to consider in cases of famous individuals who have seen massive crowdfunding success that they didn’t just succeed “because they’re famous.” They succeeded because with their prior work they built a base that wanted them to succeed. Take LeVar Burton’s Reading Rainbow campaign as an example. It was very successful for many reasons, not the least of which is that Burton has spent decades working on screen not just on the original Reading Rainbow program, but on Roots and on Star Trek, among other television shows and films. Decades of work built the base that made the Reading Rainbow Kickstarter campaign a success.

How are you building your base? You’re not LeVar Burton (unless you are, and then: hi there, big fan) but you can probably still build a base, an audience for your work that will want to see you succeed. That base starts with your immediate circle. The people you see every day. Friends, family, relatives that actually seem to like you for some reason, co-workers, people in your book club, and your neighbor who has sex too loud but you just can’t bring yourself to complain about it, because it just feels too awkward. That’s the start of your base. After that, you have to figure out how to reach beyond. How do you hook people for your project? They’re not going to support it because your project is just so amazing. They’re going to support it because your project has meaning to them.

So, find out what that meaning is and sell them on it.

Need some help figuring out this new-fangled crowdfunding thing and how to make people want to see you succeed? Reach out to us and we can set up a consultation.