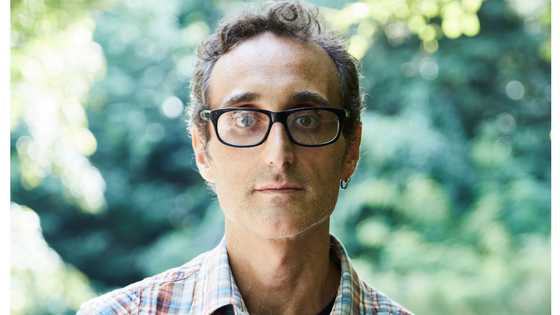 This October leading up to Halloween, we at 4MileCircus are revisiting the production of Small Talk. We will be adding new special features to the deluxe edition and running a series of reflections here on the blog from writer/director Nicole Witte Solomon and others who made this oddly enduring horror flick.

Shawn Setaro is a musician, writer, and host of the acclaimed hip hop interview podcast, The Cipher. He is a regular columnist covering the music industry for Forbes and editor at Complex. He composed Small Talk’s award-winning score. Fun fact: he also plays the glimpse of phone sex caller “Steve from Long Island”(voiced by Liam Billingham) seen through a window.

Who are you, and how would you describe your role in Small Talk?
Shawn Setaro. I was the composer for Small Talk.

Do you have a main memory of making Small Talk? Either a specific moment, an overall impression…

I have countless memories of making Small Talk. But the one I’ll share is overseeing the recording of the drum track that is used to accompany Al’s headache at the end of the opening scene. It was played by Brian Viglione, one of my and Nicole’s favorite drummers. I played him the track we wanted to use as a model. He took that idea, added his own flourishes, and created my favorite moment of the score in only a few takes.

It was amazing to see something that started as simply an idea from Nicole—in this scene, use this musician to play something that sounds sort of like this—actually come to fruition.

Sadly the only footage I have of Brian in the studio, recording shaker for the car scenes. This was not the percussion part Shawn was talking about.

My favorite horror movie is The Shining, though I’ll probably change my mind by the time I finish writing this sentence.

What are you up to right now?

Right now, I’m putting off my morning run and/or transcribing an interview by answering these questions.