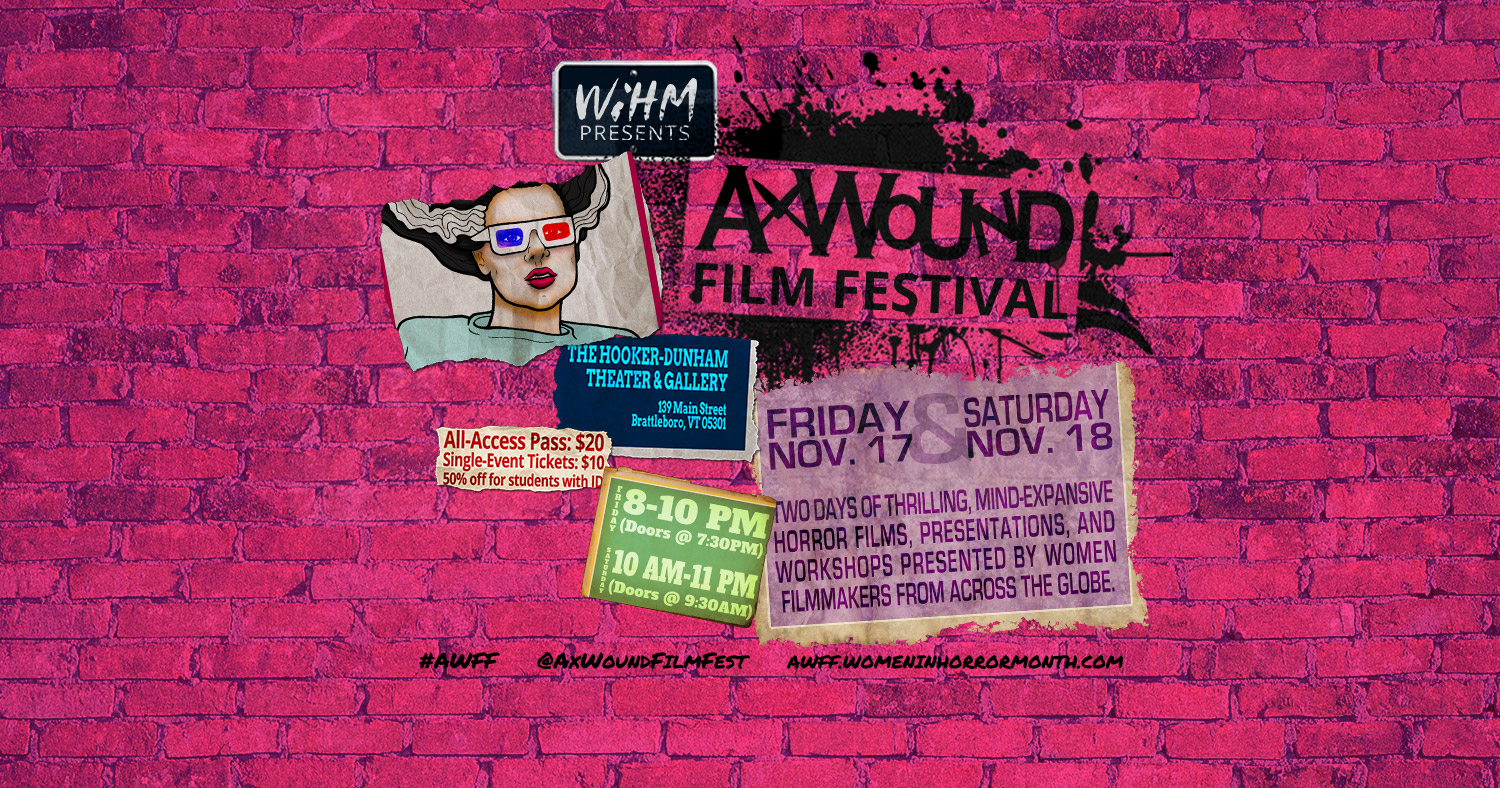 AWFF Ushers in its Third Year With a Larger Celebration of Women Horror Filmmakers and the Horror Community.

4MileCircus is proud to sponsor the Ax Wound Film Festival, one of our favorite film festivals and a central hub of our horror community. We have some special stuff planned, as do many of the other amazing film and media-makers who will be in attendance.

Here’s a little more information about what you can expect this year:

The Ax Wound Film Festival (AWFF) is back with an expanded roster of thrilling and mind-expansive horror films from women filmmakers across the globe. This year, AWFF will offer two days of over 40 short films, a filmmaker-in-attendance Q&A, and engaging presentations from leading women horror writers, artists, and directors, all at the Hooker-Dunham Theatre & Gallery in downtown Brattleboro, Vermont beginning on Friday, November 17th at 7:30PM with a filmmaker reception and the first round of shorts starting at 8:00PM and Saturday, November 18th, doors will open at 10:00AM for an all-day affair. The entire event is $20.00 with individual event prices for film blocks and sub-events at $10.00. Students who present valid ID get 50% off their purchase. Badges and/or passes will be available to buy at the door. Anyone who buys a badge or pass will receive one free month of the increasingly popular streaming service for horror fans, Shudder.   “The event turned out to be such a wonderful and successful experience for the local community, the filmmakers who attended, and the family vibe that developed into the second year,” says festival founder Hannah Neurotica. “There were also so many incredible films, workshop and panel ideas that I wanted to have and one day just wouldn’t cut it. Due to our generous sponsors, we were able to stretch our programming. Everyone involved from organizers, speakers, guests, sponsors, and attendees are involved for the love of horror and helping create visibility for women filmmakers and inspiring new ones of all ages.”   The Ax Wound Film Festival continues to grow in both interest and popularity with an eclectic program that everyone from film buffs to filmmakers will love. Alison Lang, author of Rue Morgue Library’s Women With Guts issue will be leading a discussion on “Horror in the Trumpian Era,” artist Cassandra Sechler will host a video workshop on how to create gory special effects, Jay Kay of Horror Happens Radio is back to facilitate his own brand of ‘Inside The Filmmakers Studio’ with a Q&A session, Brooklyn-based media company 4Mile Circus will be broadcasting live with a discussion about how filmmakers can utilize trans/ crossmedia, and the crowdfunding platform Seed&Spark will be represented by filmmaker Christina Raia with a workshop on how crowdfunding can be a step towards building a filmmaking career.

The film selection is equally diverse in representing both who’s telling the story and horror’s many subgenres. Hannah notes the importance of Ax Wound’s evolving mission to show that women interested in directing horror films come from a variety and social and cultural experiences. Ax Wound has carved out a space for diverse voices and perspectives, from first-time filmmakers to industry movers such as Gigi Saul Guerrero and Devi Snively. Only through this action will horror become more rich, enjoyable, and fresh. Combined, this talented 2017 class of film selections demonstrate the ambition of artistic creation and Ax Wound’s attraction to those on the cusp of mainstream prominence. Contact Ax Wound: Email * Website * Facebook * Twitter * Instagram Follow/post #AWFF  on social media

All events: $10.00 for single event or free with full event pass

$10.00 for single event or free with full event pass

A presentation by Seed&Spark Director of Crowdfunding Christina Raia Identifying and then enthusiastically engaging your supporters is essential to a career of successfully funding and distributing your films. That’s why in our class, we teach you how to find and engage your fans, run an effective crowdfunding campaign, and then distribute your film—all while preparing you to make your next film. Because after all, this class isn’t about crowdfunding: it’s about career building. Your film career starts here!

Hosted by Cassandra Sechler, Writer, Director, SPFX Makeup Cassandra will be providing a special D.I.Y. gore effects tutorial video for the Ax Wound Film Festival that goes over an inexpensive, resourceful technique for making your own guts! Cassandra Sechler also known as the “Mistress of the Weird and the Wonderful,” is a conceptual artist based in San Francisco, California. Sechler manages alongside film partner Craig Jacobson the film company Dreams For Dead Cats Productions LLC, where she specializes in writing, directing, editing, photography, character & special effects makeup. Her background and interest is in fine art photography and psychology, which aids in providing viewers with expressionistic works that are both personal and poetic.

Hosted by Jay Kay New Jersey-based journalist, photographer, programmer, and radio host Jay Kay has been a welcomed presence in the horror community for years working with Fantastic Fest, HorrorHound, Shriekfest, Icons Of Fright, Fantasia International Film Fest, and more. He has hosted The Horror Happens Radio Show since 2012, interviewing hundreds of the most renowned professionals in the horror film industry. He’s back with Ax Wound for a third subsequent year with his distinguished moderation and insightful questions for each filmmaker in attendance ready to take the stage and discuss their selected films and inspire others to use film as a tool for expression.

A presentation by Alison Lang In times of political turmoil, many of us turn to horror as both a source of comfort and a critical mirror through which our darkest anxieties about the world can be reflected. Horror in the Trumpian Era will present and discuss a selection of films that in many ways pre-imagine the nightmarish scenario envisioned by Donald Trump. We’ll also examine films that (intentionally or not) have promoted themes of resistance and retaliation following Trump’s election in November 2016. The presentation will end with a discussion of how filmmakers in the audience have used (or plan to use) anti-Trumpian imagery, storytelling and rhetoric in their own work.

The Dollhouse (2017) – Directed by Kyra Gardner

Watch Me (2016) – Written by Claire D’Este, Directed by Briony Kidd

Beneath (2017) – Written & Directed by Lindsay Serrano