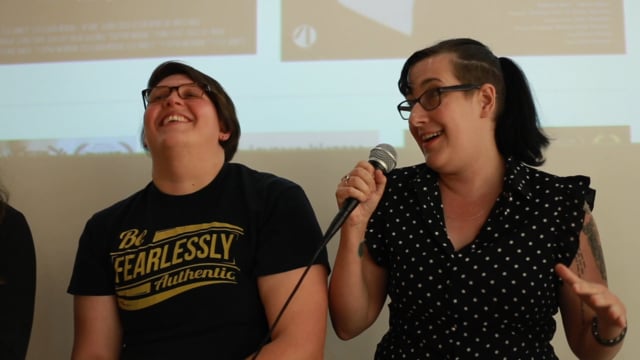 June started off with a bang for your friendly 4MileCircus pals. First, on June 2nd, we not only shot all the remaining pick ups for our horror short It’s Normal (now in editing and hopefully coming this fall to a fest near you), we also celebrated the premiere of Jeanette Sears’ short film Sanctuary at IndieWorks’ annual Pride screening, where it won the Audience Choice award!

Sanctuary was written by frequent 4MC-collaborator Jeanette Sears and follows a lesbian couple in early 1960s New York coming home after yet another bar raid. Jeanette and Nicole Solomon co-directed and produced while Sean AD-ed. The film stars Jeanette and It’s Normal lead Latresa Baker, and was shot by one of our very favorite DPs, Yessica Curiel Montoya. We’re very proud of how it turned out. You can watch excerpts from the Q&A with Jeanette and Nicole here (they start talking at 3 minutes in):

Less than a week later, on June 9th, our very first feature length film Meme premiered at The Art of Brooklyn Film Festival where it won the award for Outstanding Narrative Feature! Meme was written and directed by Sean Mannion, Produced by Carolyn Maher. It stars Sarah Schoofs as Jennifer, a graphic designer who finds a surreal and intriguing VHS mashup tape. Jennifer searches for the creator of the videocassette, but finds herself instead.

If you subscribe to our podcast you’ve probably already heard the Q&A from the screening, but just in case you didn’t, you can listen below: